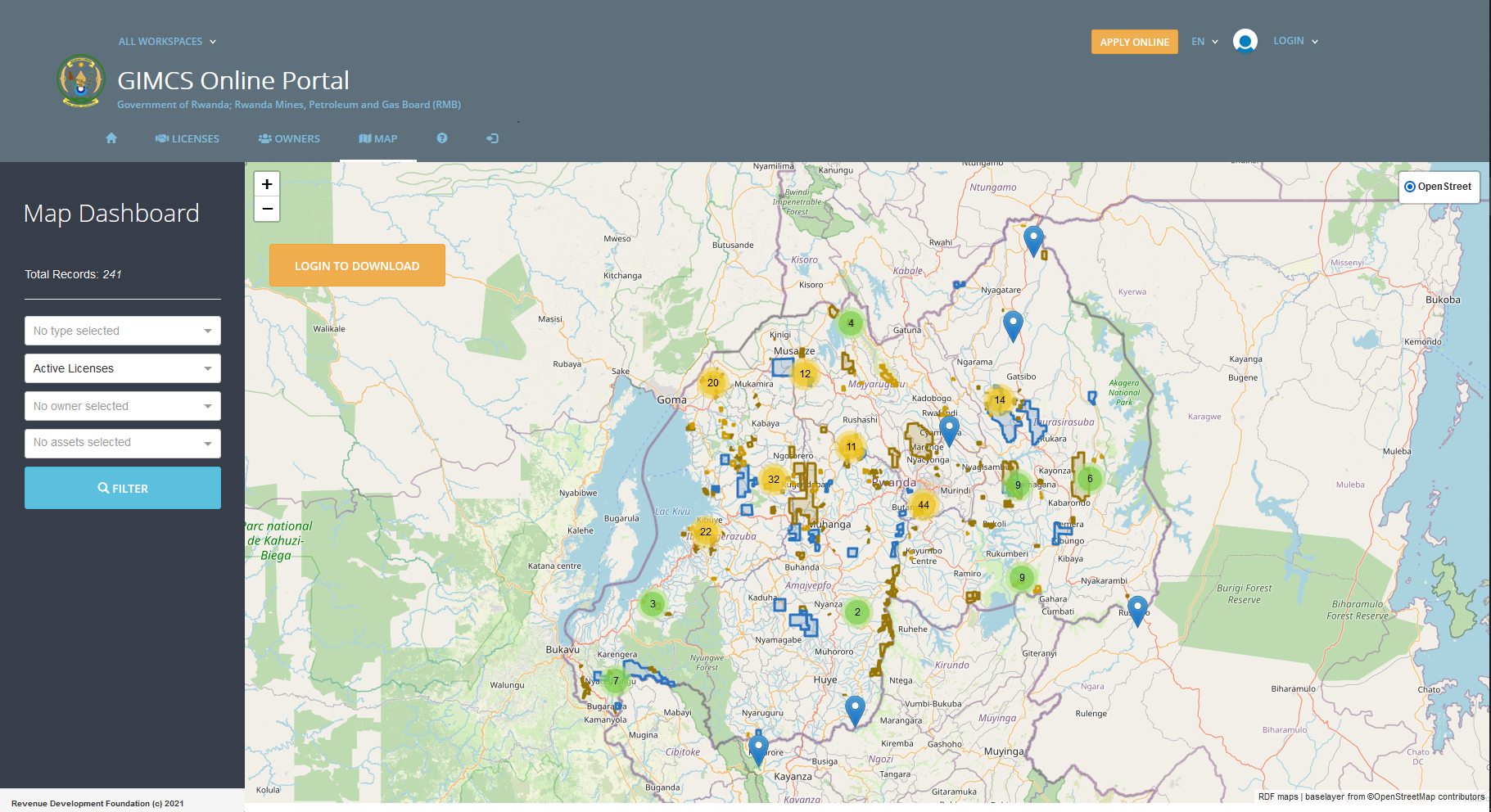 RDF continues to support government institutions in 12 countries to progress on digitalization. In this month’s newsletter, we will focus on RDF’s impact in Rwanda.

In late 2021, RDF won a contract with the Rwanda Minerals, Petroleum and Gas Board (RMB), funded by the GIZ German international cooperation agency. The contract is under a regional project addressing trade of conflict minerals in the great lakes region.

RDF have implemented MCAS and the online repository portal under the name Geological Information and Mining Cadastre System (GIMCS). It replaces the previous cadastre sytem and digitalize all key processes in RMB, involving all staff working on the same platform.

The portal comes with Single-Sign On (SSO) authentification, which will allow RMB to add future additional applications and services to public users and companies online.

The project is digitalizing all key processes at RMB. The most important ones are related to application processing and license compliance management, archiving, geological data surveys, maps and inspections.

All licenses for exploration, large-scale and small-scale mining have been digitized and the processing rules have been configured according to the regulations. Additionally, processes related to 30 district offices for quarry licenses and recommendations for blasting materials have been setup in separate workspaces. This allows RMB to segment responsibilities for certain license types, supporting division of labour and delegation of authority.

The geological department has also been consulted in the setup of four geodata modules and trained to digitalize their work related to surveys, borehole registry and mineralization reports. The inspectorate has also been engaged with defining a module on inspections. This module will allow inspectors to record the inspection results in the system and attach it to the license profile. Information recorded under inspections will be key for licensing unit while processing renewal requests. Apart from this, the archiving team is successfully using GIMCS to record old mineral maps and other related documents. Such digitized archive will make the old maps searchable, increasing their usability.

Furthermore, with GIMCS installed and in use, RMB can now effectively track outstanding payments and reports from companies. The system also allows RMB to track requests for renewal or transfer of licenses, along with the list of licenses close to expiry.

RMB will soon invite companies to register in the portal. Users that registers in the online portal can request to represent a licence owner. Access to the company pages are subject to RMB approval, based on the documentation submitted by the user.

The company representatives can apply for new licenses and manage all their existing licenses. For existing licenses they have options to transfer, surrender or reduce the license area. They are also prompted about reports expected and due for each license based on the regulations for that licence type. When submitting reports they can see when the government have reveiewed the report as compliant.  They also get weekly email notifications for changes made or anything outstanding.